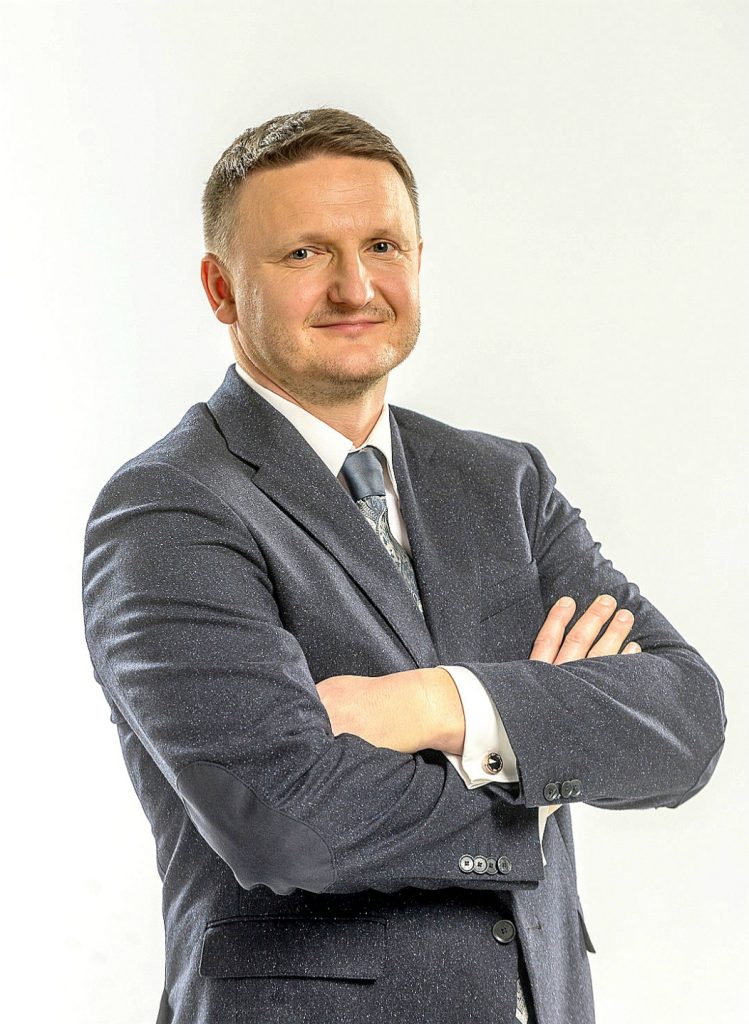 Latvia’s real estate market of the premium segment in 2019 has demonstrated growth in terms of the number of transactions, as well as the total value, reaching the highest point of growth since 2014. The premium segment market last year was characterised by a total of 671 transactions to the total value of EUR 180.6 million, which is an increase by EUR 26.3 million or a 15 % increase in market activity year-on-year.

This is evidenced by the study conducted by premium segment real estate company Baltic Sotheby’s International Realty on the activity of transactions in 2019 in three studied regions and three segments of premium properties: apartments, private houses and land plots for residential construction in Riga, Jūrmala and Pierīga. The data on the apartment and land plots for residential construction worth more than EUR 150,000 and private houses that cost more than EUR 350,000 were summarised in the study.

In 2019, the three largest regions of premium real estate of Latvia and the three reviewed market segments have recovered from the decline encountered in 2018 and the growth has been the strongest over the last five years. The total value of transactions in all three regions of the survey increased by EUR 26.3 million and the transactions performed in Riga accounted for more than two-thirds of the total amount. A total of 495 real estate items to the value of EUR 118 million were bought in the premium market of Riga, which was an increase by EUR 19 million of 19.2% from the last year. 117 transactions to the total value of EUR 48.9 million (an increase of EUR 5 million) were performed in Jūrmala. Although the figure is higher compared to 2018, the total value of transactions in the resort city was by EUR 15 million lower than in 2017.  Like in Riga, the premium real estate market in Pierīga region in 2019 was the most active over the last five years. It is characterised by 59 transactions to the value of EUR 13.6 million, which still positions the region below 10% of the total turnover of all three regions.

“For several years, the premium housing market of Latvia has been the market of the local buyer, if compared to the trends observed before 2015, when a strong influence of foreign buyers existed. These changes have occurred under the influence of global political and economic processes. The long term assessment of the vector change is positive, however, the developers of premium housing and the traders must take the reduction in value as a result of such re-direction of the market into consideration.
The statistical 15% growth of Latvian premium market last year is a positive indicator on the background of global volatility, as well as processes in the local economy last year, which were negatively affected by the complications in our financial sector as a result of the introduction of AML procedures, attempts at restoring reputation and, primarily, not being included into the “grey list” of FATF. As a result of these processes, almost all sectors of the economy, Latvian companies, natural persons and potential foreign investors experienced difficulties.  On the other hand, the premium market is adapting and becoming more accessible to a local buyer.
On the background of moderate growth of Latvia’s economy, which is estimated to be within the limits of 1.9 % – 2.6 %, with stable prices and remuneration (on average +6 % this year), as well as the growth of employment, we can observe that the purchasing capacity improves since the salaries are growing faster than the prices. Thus, as the welfare of residents continues to grow this year, the growth will be ensured by internal private consumption, which, as the Ministry of Finance estimates, will increase by 3.3 %.   As a result, the premium real estate segment of Latvia is expected to develop at the same rate as the contribution of the local buyer, despite global volatility and caution of foreign investors,” says Vestards Rozenbergs, the owner and Chairman of the Board of Baltic Sotheby’s International Realty.

The demand in the market of private houses increased moderately last year. Although the total turnover of Riga, Jūrmala and Pierīga premium private house market is characterised by an 11% growth in turnover, reaching EUR 24 million, it was generated on a significantly low base level of the 2018 and has demonstrated the second-lowest performance over the last five years. A slight increase is observed in Jūrmala and Pierīga regions in terms of the number of attracted buyers, as well as total purchases, while the market of Riga has been characterised by opposite trend: the market of premium private houses in 2019 has dropped to the lowest point since 2016. Only 6 properties at the vale of EUR 3.5 million were purchased in the capital, a drop of EUR 1.2 million from the previous year. The average value of the property has also declined in Riga: A premium private house last year could be purchased at a price that is by EUR 40,000 or 7% cheaper year-on-year, with the average price reaching EUR 580,000.
Jūrmala, which had previously been the leader in the market of premium private houses, also failed to demonstrate good results. Like the apartment market, the turnover of the private house market of the resort city in 2019 is in the second-lowest position over the last years, reaching the turnover of EUR 15.7 million. It consisted of 14 transactions, an increase of 4 transactions and EUR 2.1 million from the previous year.  The buyer had to pay on average EUR 1.1 million to acquire a premium private house in Jūrmala, which was almost by EUR 250,000 cheaper than a year earlier.  The reasons for the change can be clearly seen if the transactions are analysed by price level, where a threefold drop in demand is observed for the most accessible market segment, which accounts for a turnover of EUR 2.9 million. Meanwhile, in the group of properties worth EUR 500,000 – 1,000,000 only two houses changed their owners. Five private houses worth more than EUR 1 million have also found new owners, at the total cost of EUR 11.6 million (an increase from 3 transactions to the value of EUR 9.3 million in 2018). Although the highest segment of prices has been rising for the second year and is at the highest point over the period of five years, the trend is not expected to last long due to purchasing capacity of the residents of Latvia.
In Pierīga region, the market of premium private houses is increasingly focusing on the purchases of more accessible buildings. The market has been growing for the third consecutive year with the 12 transactions reached in 2019 generating the turnover of EUR 4.9 million (a year-on-year increase of 4 transactions or EUR 1.2 million).  Almost one-half of these transactions (5 transactions) were concluded in Garkalne municipality to the sums that were lower than EUR 400,000. The average value of the transaction in the market of premium private houses in Pierīga dropped to the lowest point over the last seven years: the average value of a house decreased by EUR 60,000 to EUR 410,000.

Land market – the most active

The level of activity in the market of premium land plots for construction has reached the highest point over the five years. A total of 28 land plots to the value of EUR 8.2 million were purchased in 2019 with the objective to build a private house, an increase of 12 transactions or EUR 3 million from the previous year. The largest growth was observed in the territory of Riga, where almost one half of all purchased land plots or 13 properties to the total value of EUR 4.5 million are situated, almost doubling the turnover in comparison with 2018. The achievements in the land market of Pierīga is approaching the activity in Riga: the total turnover reached EUR 2.5 million which exceeds the value of transactions in 2018 more than two times, and the number of transactions has tripled as well (to 12 transactions). Meanwhile, the total value of land plots for construction purchased in Jūrmala has declined to EUR 1.2 million, although it was the most expensive land for construction: an average transaction of a land plot purchase in Riga, Pierīga and Jūrmala cost EUR 350,000, EUR 200,000 and EUR 400,000 respectively. 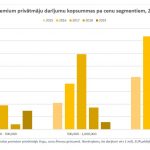 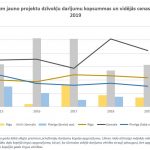 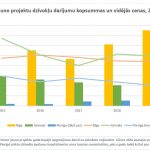 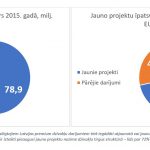 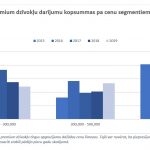 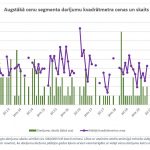 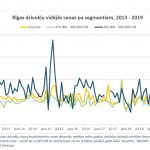 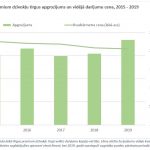